Welcome to the Jungle

The Palace of the Lost City, built in 1992, was inspired by an ancient myth of an African kingdom that was lost to the jungle surrounding it. Today it stands within the remnants of a volcanic crater that erupted one million years ago, encircled by four mountains, and with a game reserve on its doorstep. According to legend, it was here that archaeological explorers unearthed the ruins of a magnificent palace...

The myth tells of a nomadic tribe from North Africa that settled in the Valley of the Sun. And in the crater of a long-extinct volcano, they established an enchanted city and built an opulent palace for their beloved king.

Some years later, an earthquake struck and it is said that the royals were borne to safety on the backs of kudus. On returning, they found the palace had survived the quake, but the city was destroyed. After the death of the royal family, the palace and the city ruins were consumed by the jungle.

In reality, however, the jungle is a modern creation, the largest man-made garden of its kind on earth and a resurrection of legend. It was conceived and evolved not over millennia, but in a few short years, under the care of South Africa's finest landscapers, and painstakingly designed to transport visitors into another realm.

It all began in 1989 when The Lost City and the jungle were conceptualised as a magical part of the Sun City experience. Most of the work to establish the jungle was completed in two years by a dedicated team of 440 gardeners and, during that time, over 1.6-million plants were given root, including 6 000 fully-grown trees.

When landscaping for the momentous project got underway, four primary micro-environments were envisioned – a tropical rainforest, wetlands, a coastal vegetation area, and an arid bushveld section to border the golf course and merge with the natural indigenous landscape of the neighbouring Pilanesberg Game Reserve. The 25-hectare jungle was ready by late-1992, having cost R25 million.

Nothing like this has ever been created in Africa. The rainforest features a 40m-high jacaranda canopy with another level of trees underneath it, primarily red beeches and fluted milkwoods. Exotic orchids grow off trunks and branches and dangle from above, while the microclimate is intensified by numerous water channels, waterfalls and streams.

The jungle features 3 200 species of plants, shrubs and trees – more than twice what's found in Kruger National Park –  and most of the species had never before been cultivated here. Horticulturalists sourced seeds from around the globe and rarities from 14 countries, including Australia, Zimbabwe, the Comoros, Mozambique and Madagascar. 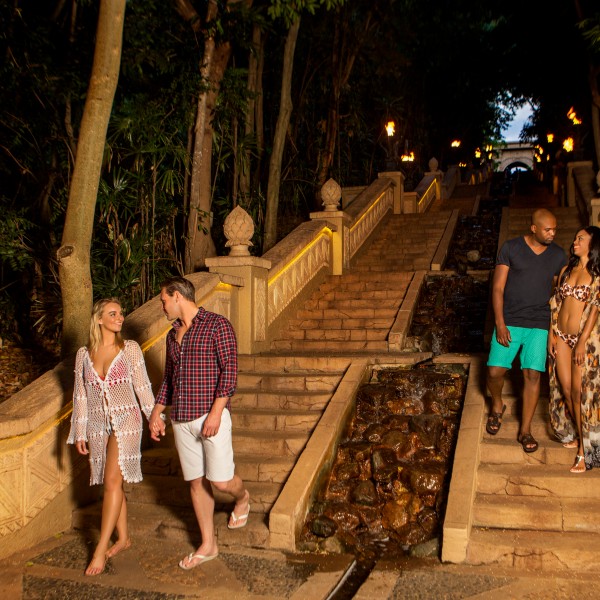 The jungle is home to more than 190 bird species which means that the canopy is constantly alive, whether with starlings that have arrived from East Africa or India, robins taking a break from the Chinese winter, or parrots that were brought in from the Far East. Residents include whistling ducks, bronze manakins, and African paradise flycatchers. Local birds worth watching out for include our national bird, the blue crane, the African sacred ibis and the common waxbill.

In keeping with the fascinating legend that inspired the jungle, the imagined ruins of the ancient city have been added as though ensnared, entangled and overgrown by nature over thousands of years. A priceless project indeed. 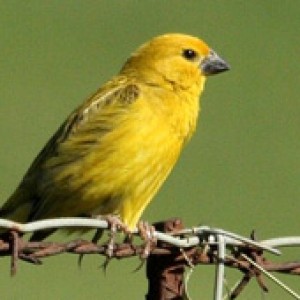 At the peak of construction, up to 5 000 people were engaged in the 28-month project that required 30 million bricks, 15 000 custom-made pieces of precast concrete, and 85 000 cubic metres of poured concrete. The King's Tower – tallest of The Palace's 10 towers – is 70 metres high, a magnificent centrepiece for the jungle that surrounds it.

Executed on a phenomenal scale in opulent detail, the palatial hotel features a vast array of sculptures, murals, fresco ceilings, mosaics, decorative fountains and polished marble in 38 different hues. Bringing the jungle theme into The Palace, the towers and domes are capped by moulded palm fronds, carved antelope emerge from the central tower, a bronze elephant graces the atrium, and two-ton tusks sculpted from Indonesian wood emerge from above the Tusk Lounge and Bar.

A central feature of The Palace is the Valley of Waves, a huge water park of swimming pools, waterfalls, streams, thrilling tube rides and slides. The finishing touch to the illusion of being in the midst of an ancient archaeological discovery is The Maze, the Southern Hemisphere's largest permanent maze. It can only be reached via a 90-metre-long suspension bridge, which is an adventure of its own. 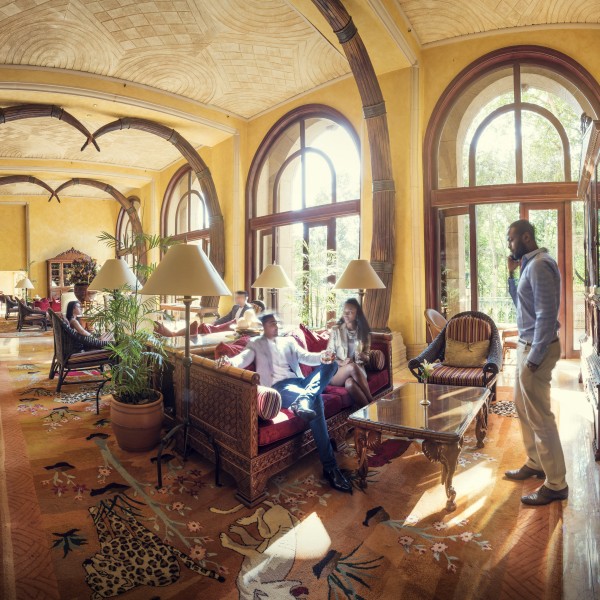